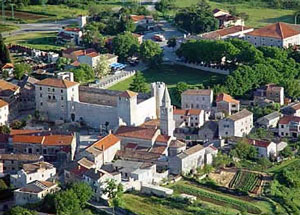 Southern Istria is known for number of interesting natural, historical and cultural attractions, all of them just 20 to 30 minutes drive from Orihi. The main touristic towns of Pula, Rovinj and Poreč are also near by. The nearest beaches are around town of Rovinj, 22 km from Orihi. Rovinj, in a past a fisherman's town, is one of the most beautiful towns on the Adriatic coast. If you want to enjoy the countryside, you can choose from numerous well organized bike and hiking trails (we will give you the maps).

20 km south from Orihi, in the region of Vodnjan, the admirers of olive oil can find olive-oil roads with producers of the olive oil considered among the best in the world.

Just 6 km away from Orihi is beautiful medieval town of Svetvincenat with its well preserved and restored castle where many cultural manifestations take place such as dance festival, etno and jazz evenings. Bike trails can be found in this area, too. If you take the road to Poreč, you will pass through very rich wine area with many wine cellars. Istria is best known for its white wine malvasia (malmsey) and red teran. We suggest you some of the best wine growers of this area: Radovan, Pilato, Poletti, Marijan Arman and Franc Arman (we have the wine map, too).

One on the most interesting istrian natural fenomenon, cave Baredine, can be found in this area as well. The guided tour lasts 40 minutes and inside the cave you will see 5 galleries with underground lakes.

The largerst istrian town of Pula , famous mainly for the numerous old Roman remains, is 22 km from Orihi. The most popular attraction is Roman amphitheater (Arena), the sixth largest and one of the most preserved in the world. During summer the amphitheater is the place where pop concerts, ballets shows and operas take place ( Carreras, Pavarotti, Sting, Anastasia, Simply Red, Eros Ramazzotti, Zucchero, Jamiroquai, Norah Jones are some of the stars that have performed in Arena ...). Only few kilometers from Pula are Brijuni islands with its National park which can be visited by guided tour (boat starting from Pula harbour).